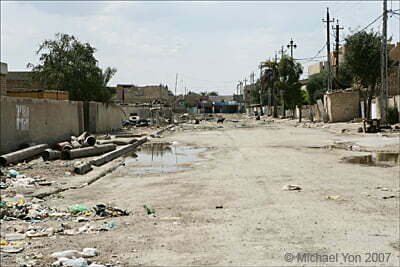 I landed in Baghdad yesterday, 30 January 2008, on a Japanese Air Force flight from Kuwait. I immediately embedded with an American infantry battalion called the 1-4 Cavalry. After 1-4 CAV soldiers picked me up at the airport, I pulled on heavy body armor  and we went into a mission that lasted into the early evening. No drama this time. I didn’t even hear about any action over the radio.

The 1-4 CAV’s area of operation (AO) in South Baghdad is probably safer than the “Green Zone.” We walked around and talked with Iraqis for hours. I had some interesting conversations about tribal allegiances and other social power structures. Here in Iraq, the tribes are very strong, and I have been working to build a greater understanding of how tribal affiliations influence people.

The kids are learning English quickly here. Iraqi kids were coming up to the 1-4 CAV soldiers on the street. The soldiers knew the kids’ names, and the kids called the soldiers by their names and ranks. I was told yesterday by an important Iraqi doctor, with whom I speak fairly regularly, that Iraqi mothers are encouraging their children to learn English. Sometimes the kids act as on-the-spot interpreters for their parents or others in their neighborhood.

The 1-4 CAV has not been attacked since 9 September 2007. This is incredible, considering that their AO had been one of the worst battlegrounds in Iraq. I remember my first embed with 1-4 CAV in late March 2007. As soon as I arrived, I went out on a raid; the next day we were in a firefight.  But even then, there were glints of hope. Now it’s nothing but tea and progress. Of course, the young combat soldiers are getting restless and want to head over to Afghanistan or up to Mosul where the fighting is full on.

The neighborhood is mixed Sunni and Shia. There is so much cooperation between the 1-4 CAV soldiers and their Iraqi neighbors, both Sunni and Shia, it seems surreal. Lieutenant Colonel James Crider, commander of the 1-4 CAV, told me the story of one local bad guy who had been detained but was released, only to return to the neighborhood. Within a day, eleven Iraqis had either called in to 1-4 CAVs tip line, or stopped soldiers on the streets to report the bad guy’s presence. Incidents like this explain why Al Qaeda is having a hard time trying to re-germinate here.