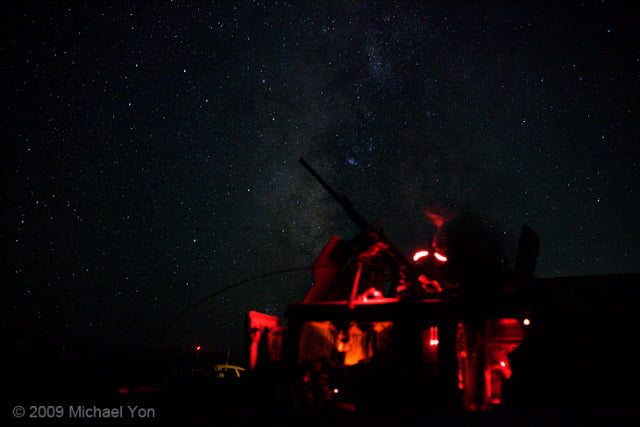 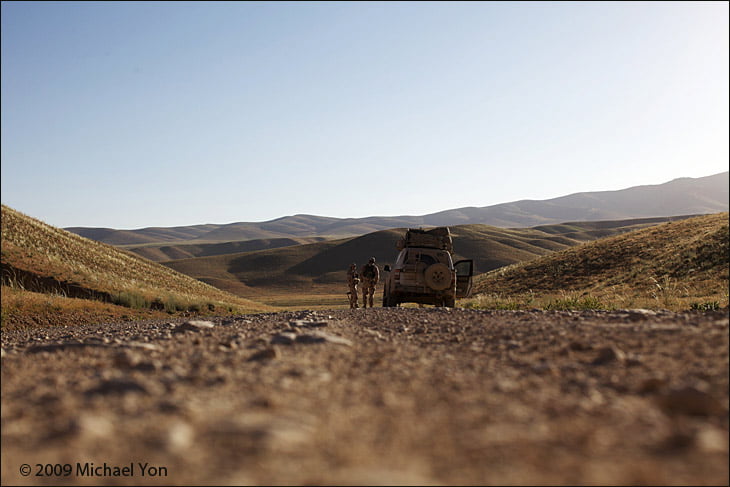 About 45 minutes into the journey, the guide got a call that the Kuchi nomads had moved, and there was some confusion as to where they were.  This treeless terrain might look wide-open, but its vastness is like the sea and extremely difficult to search through.  Furthermore, despite the fact that the Kuchis might know their way around here, for generations gone, few locals have use for maps or know how to use them.  They couldn’t just give a grid reference to us.  They might have known where they were, but not where that was in relation to where we stood.  And so we kept going, stopping, and asking many people along the way.

Lithuanian soldiers are good with maps, but nobody else was, so there was much confusion as to where the Kuchis might have gone.  The grass cutters were of little help.  The man closest on the left is a Pashtun from Chaghcharan and is the Kuchi representative.  He’d never heard of Michael Jackson though the interpreter (pointing) had, and knew he had died.  We turned around and headed off in a different direction. 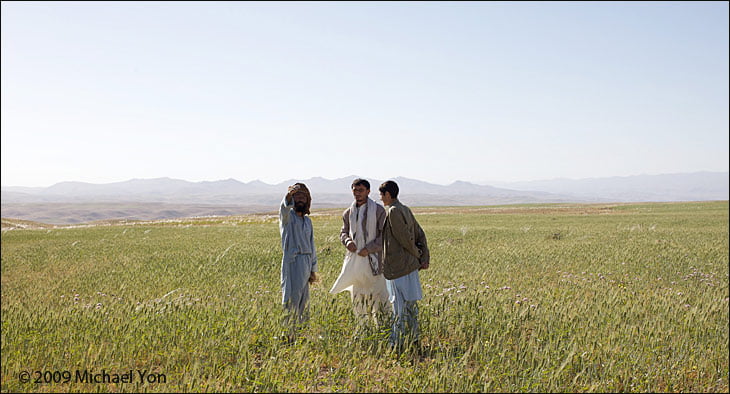 The Lithuanian soldiers had brought four doctors along to examine the Kuchis and offer simple medicines, and despite that the Kuchis actually wanted to be found, they were nowhere to be seen.  In regard to the war, the Kuchis have a reputation for neutrality, and there are said to be about 5 million in the region.  I see them in many places, but they are standoffish and have giant dogs that are called, not surprisingly, Kuchi dogs.  Kuchi dogs look like they could rip a door off a Humvee.

The man in the middle is an Afghan doctor who studied medicine in Kabul.  In my Humvee were two other doctors. The first was Vitaly, from Ukraine, and he was a laugh because every time we stopped, he wanted his photo taken several times in various poses with different cameras.  The second doctor was from Georgia and I called him “Georgia.”  The gunner and driver were Lithuanian soldiers whose English was only slightly better than my Lithuanian, so we didn’t talk much.

We came to a steep hill, with the road we wanted down below.  The directions we were given to reach the Kuchis would lead us through a known minefield, so the Lithuanian PRT Commander, Colonel Alvydas Siuparis, radioed from base to find a new route. 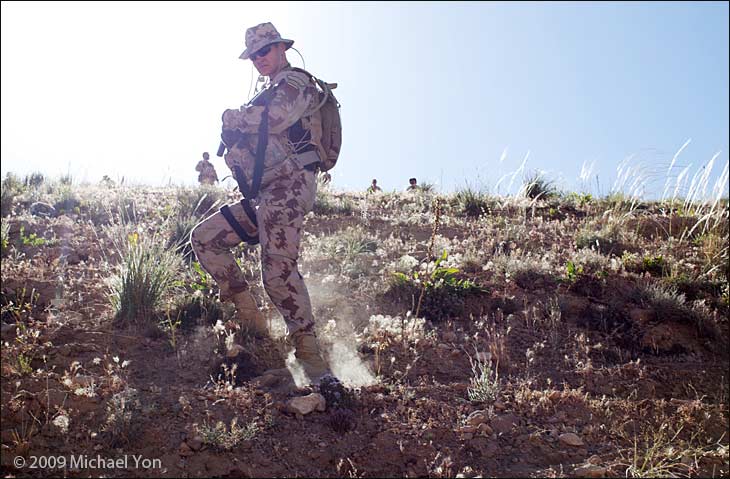 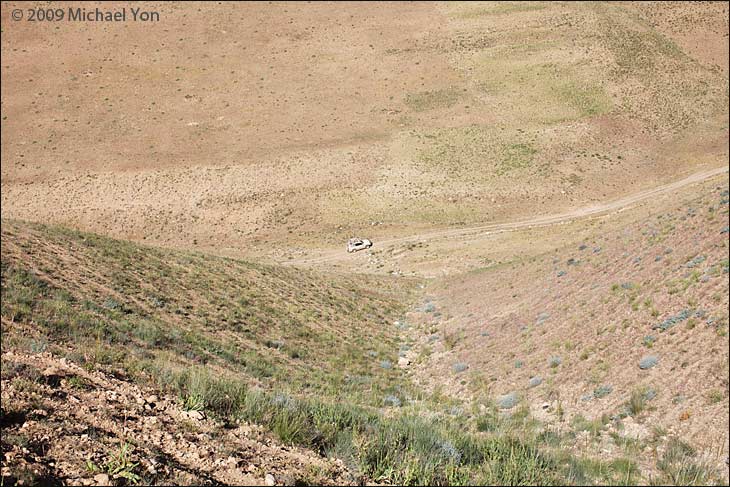 And so we headed higher, because that’s where the grass cutters said the Kuchis had gone.  Up, up, up, the road ended and we drove through high meadows, eventually coming to the end of a small stream that disappeared into the soil.  The higher we climbed, the higher the grass.  And we came into an area with many butterflies, but within just a couple of minutes we were through the butterflies and came straight into an area of thousands of baby frogs, for here the little stream was still flowing and had not yet reached its end.  Thousands and thousands of baby frogs were hopping about.  And just as quickly as the butterflies ended, the frogs were behind us and we came to a small field with many small birds, and there was a hawk.  Just through the other side of the small birds, we came to another field, this one was filled with plants, from one to two feet tall, and each of them looked like a giant golden pipe cleaner.  Now the grass was higher and there was a small field with a many plants, each blossoming with white and gold flowers, side by side.  Each plant had both white and gold blossoms growing on the same stems.  Amid these flowers were many small birds and butterflies at the same time.  Then we drove through and the land opened to a village, which we did not expect.

Please click on the above image for a larger view.

There were no power lines or satellite dishes, but there were three turkeys, a cow, a donkey, four horses, a crazy man and several kids running around.  The crazy barefooted man ran out to the lead vehicle and stared.  The kids neither waved nor ran. They didn’t smile or frown.  The place looked fairly stone aged. 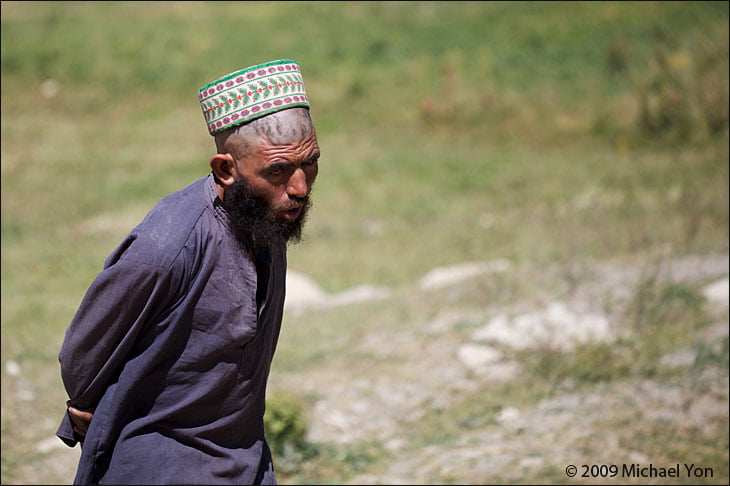 And there was a fairly well marbled cat.  The GPS indicated that the village was about 8,800 feet above sea level, which means we were high up in the middle of nowhere, and it seemed curious that a cat this far up would be so healthy looking.  Not that I know much about cats, but it seemed noteworthy.

About half a dozen men came out.  They were unarmed and friendly and wondered why the Americans were here, but in fact it was the Lithuanians.  Just about everyone in Afghanistan is seen to be Americans.  It doesn’t matter if there is a giant Canadian flag on your forehead: many Afghans have never heard of Canada, nor other places.  Down in Chaghcharan everyone knows the difference between Lithuanians and Americans, but not out in the villages.  Luckily, the Lithuanians have been giving Americans a good name. 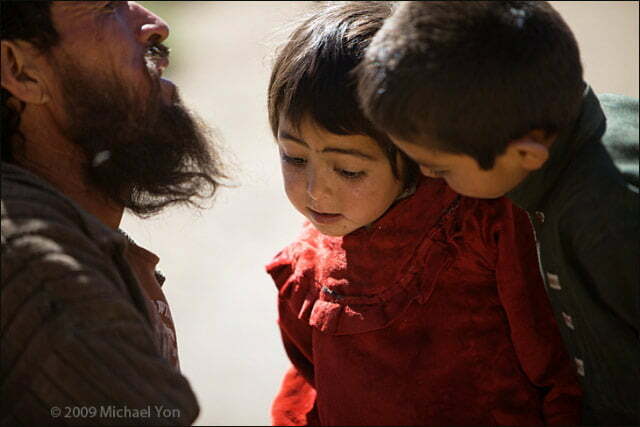 The women did not hide and the men were good with the kids who hovered around but only out of curiosity.  The kids never asked for anything, although some smiled at the Lithuanian soldiers when the soldiers smiled.  But the kids didn’t seem to have any idea what a wave meant.  If you waved, they just looked at you, but if you smiled they smiled back.  After a few minutes of talking, the Lithuanian Captain asked the headman if he’d seen any Kuchis around here, and the man said they were about 1.5 hours “that-a-way.”  If the last few hours were any indication, this man had no idea where the Kuchis really were.

He said the village had been in this location for fourteen years, and its name was Karbasha Qalat. There are about twenty families in Karbasha Qalat, and by now I had counted six men, seven women, twenty-three kids, two Kuchi dogs, three strong horses and a foal, a healthy-looking donkey, a mangy cow, three turkeys, about seven scrawny chickens, and one fat cat.  There were huge piles of dung that was formed into cakes for heating and cooking, but there was far too much dung for the meager inventory of animals (listed above) to have produced versus the consumption of these people.  There were some goat and sheep prints on the ground, so likely there were shepherds still in the high pastures.

The Lithuanian commander had to make a decision: push on and maybe not find the Kuchis, find them too late to render medical work, or ask the village headman, whose village has never seen a doctor, if they wanted help.

Meanwhile, I kept talking with the men, who had never heard of Michael Jackson.  I asked them if they knew about the war, and they laughed and said there had been no war here in forty years.  “Why would I want war?,” they asked.  All is good here, they suggested.  I asked whether it was “forty years or fourteen years” (they said the village was founded fourteen years ago), and the headman clarified “no war in forty years here, and the village was made fourteen years ago.”  When asked if cars ever came here, the headman said he had only seen two cars come up in fourteen years.  The cars — had to be 4-wheel drive — had come last year and the people who came in them were looking for information on minefields.  (Those mine clearance people, whoever they are, get credit for truly pushing into the boondocks!)

Asking if they knew about the current war, they laughed again, saying there hadn’t been a war there in forty years.  “Why do you want war?”

“Yes, the war in Helmand,” they said.

I said, “The Russians are back.”

The men burst into laughter and said, “Please, welcome back our old friends, the Russians,” and they kept laughing.

They joked constantly about this and that.  They said they were Tajik and only the headman could read.  They were a very funny lot and enjoyed seeing the screen on the digital camera, but the kids, who almost certainly had never seen a television or anything electronic, didn’t know what to think of it.  At first, they didn’t seem to know what a camera was, but apparently the men explained to the kids and some of them held still for photos.

A Lithuanian soldier had walked up into the village with a man, and I saw the man run out with a switch and start smacking some dung cakes, and I thought, What in the world?  That’s how I used to catch lizards.

There were lizards galore!  Hundreds – no, thousands – of lizards living in holes both in and around the village.  They were scampering everywhere.  It was like a little Galapagos, Afghanistan.

The boy said “it’s unlawful to touch them,” and so he used the sack to catch lizards and handle eggs.  I asked if they eat the lizards, but that, too, is unlawful.  “Unlawful” means that Mohammed did not specifically authorize to eat the lizards, so they can’t eat them.  Those lizards could have fed an entire village of Costa Ricans.

Please click on the above image for a larger view. 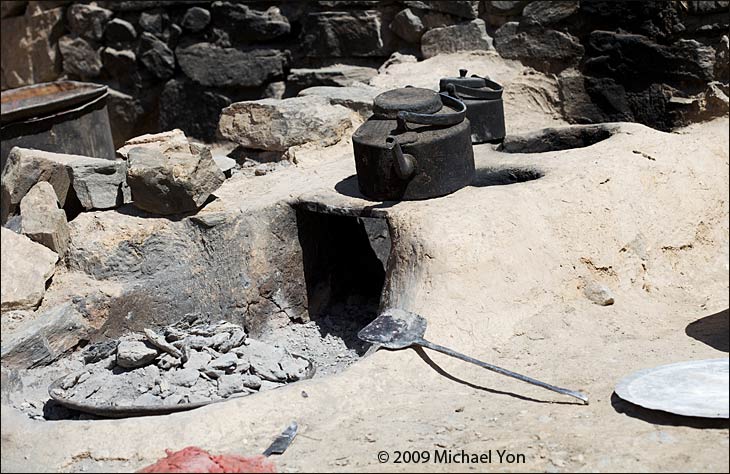 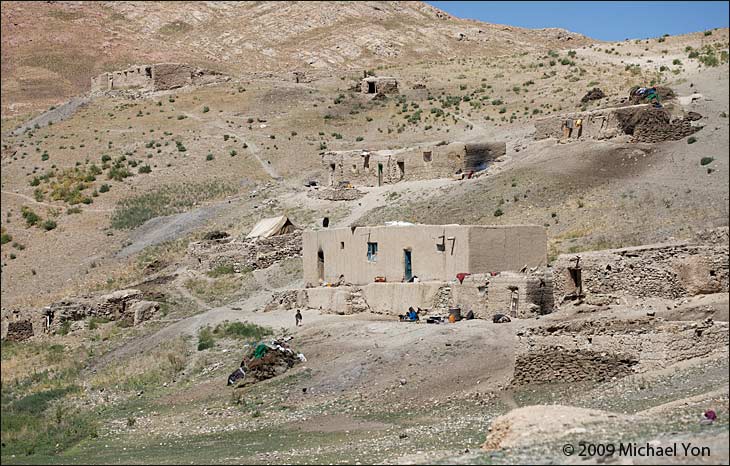 One Afghan man told me that if the mud homes are extremely well made, they can last a hundred years.  The walls are very thick and far more than bullet proof, and so the homes have much thermal inertia, keeping them somewhat cool in summer and warm during winter.  Afghanistan is known for its dramatic temperature swings that can occur in very short time spans. 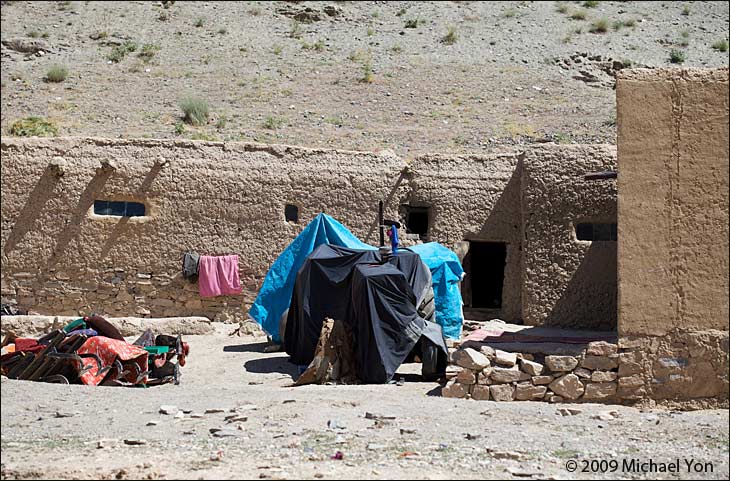 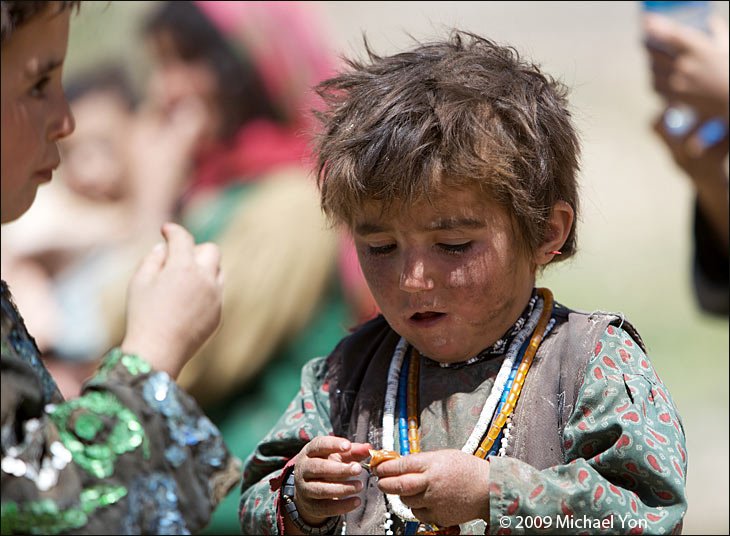 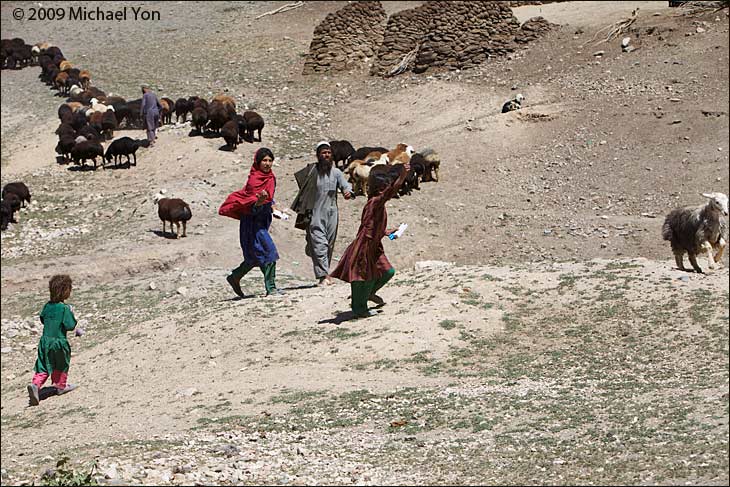 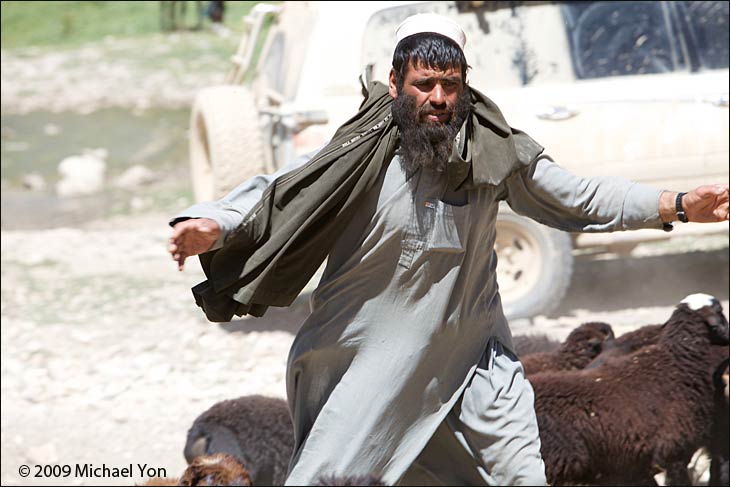 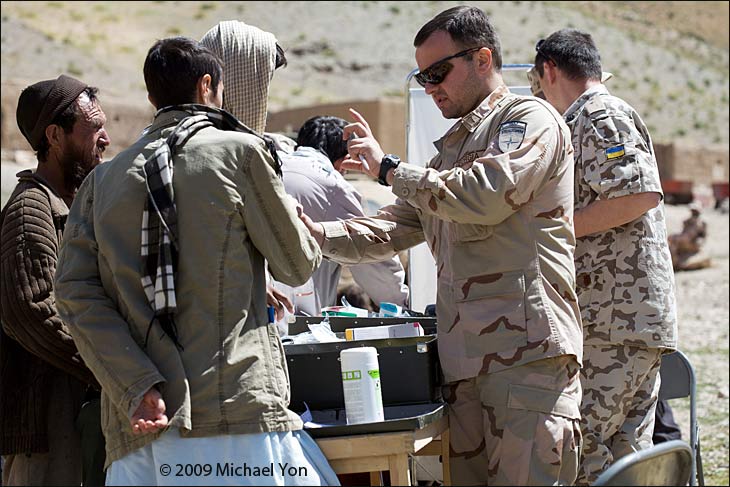 The four doctors, from Afghanistan, Georgia, Lithuania, and Ukraine, saw all the villagers.  These medical missions also have military value: “MedCaps” (Medical Civil Affairs Patrols) allow soldiers to go into a village or neighborhood and take “inventory” and vital information.  Special Forces teams have used these for many years not only to build good will, but to sense the “atmospherics” and derive information.  For instance, we left knowing a great deal about the village, including taking down names and photos, and we came away with the knowledge that this is a friendly village.  Information also got back to the Japanese, who are investing billions of dollars in Afghanistan, that the village of Lizard Hole has no electricity and they people are friendly.  The Japanese took immediate interest.  And so, with any luck, maybe our aborted trip to find the Kuchis will bring the Japanese to Lizard Hole.

And so that was it.  We didn’t find the Kuchis, but we found Lizard Hole and then headed home with valuable information.  If the Japanese venture up here, the people of Lizard Hole will be very lucky.

The Last 8 Books I read on Famine