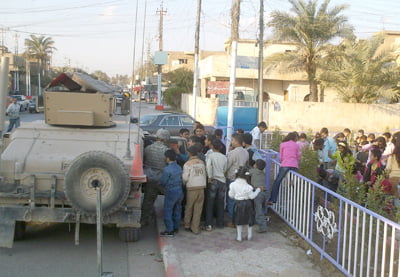 In fact, we have been repeatedly informed that people have not celebrated so much in years! They literally were dancing in the streets for a couple of evenings in December celebrating Eid al-Adha which recognizes Abraham’s willingness to sacrifice Isaac as described in the Old testament of the Bible as well as the end of fasting for Ramadan. During this time most families celebrate with the slaughter of a sheep and give gifts to those less fortunate.

A major factor in our success here has been the bond that has developed between the people in our area and the soldiers of 1-4 CAV. We are a part of the community. It is commonplace to smile, wave and exchange customary greetings with people on the streets. Or the children who follow many soldiers to shake hands and speak every word of broken English they know (Hello, Mista! How are you? What is your name? Give me chocolate! Football!). I will often stop by to visit someone at their home just to say hello and they always ask why it has been so long since I stopped by even if it has only been a few days. Apache Troop knows one man who drives to the main road in the neighborhood with sandwiches and chai to find them if a trooper fails to come visit him every 2-3 days. Recently, I was chatting with the mother of one of the young boys that run up and down the street with us. This young man is probably 10 years old or so and his English is good enough that he can hold a conversation and is frequently used to interpret for his friends. His mother embarrassed him in front of us when she told me that he cried himself to sleep the previous night because he knew we would be leaving shortly. He has been busy trying to collect everyone’s email address so he can stay in touch.

On Christmas Eve, one family invited 1st Platoon from C Troop to their home for Christmas dinner complete with a Christmas Tree in the living room. Mr. Blake Powers, a reporter from the “Blackfive” website went with them and wrote about it. Actually, this was the second time they had them over, the first being for Thanksgiving! The neighborhood also hung blue lights up and down the streets and as New Year’s approached several stores wrote “Happy New Year 2008” for us. Being in the area 24 hours a day there are many encounters at night as well that illustrate their trust. Just a couple of weeks ago someone’s home caught on fire when a candle left on top of a TV was forgotten and allowed to burn all the way down. Bandit Troop’s 2nd Platoon responded and not only helped put out the fire but treated one person for smoke inhalation and another in the home for minor burns. More recently, 1st Platoon from Bandit responded with help for an elderly gentleman who had fallen in the shower and injured his back. They gave him immediate aide and escorted the ambulance directly to his home. Recently, I was drinking chai with a distinguished gentleman who told me that the citizens here don’t just like our soldiers, they love them. Believe me, these examples barely scratch the surface but I hope provide you with a sense of the relationship we have with the citizens of Doura.

However, we remain vigilant watching for insurgent groups of any kind to re-emerge. The true benefit of the relationship we have with the Iraqi citizens is that they are inclined to pass us information that will help to stop an attack before it occurs or to quickly find out who is responsible for any type of disruptive activity. Our soldiers are also busy in assisting area leaders in building an effective local government to provide them an avenue to voice concerns and to get problems addressed. This is a challenge as the volunteer neighborhood representatives we do have to help are just that, volunteers who are not paid. The goal is that at some point the local government and the national government will intersect. In addition, we conduct patrols with the National Police and work to integrate local security volunteers as they wait to become recognized Iraqi Policemen. Finally, we continue with the struggle to persuade the various ministries to repair the water and sewer issues as well as electrical problems as they arise.

We have had the pleasure of hosting a number of reporters over the last few weeks as well. I mentioned Mr. Blake Powers who turned in a couple of very nice stories that you can find on the web at www.blackfive.com. Also, in December we hosted a small group of people from Move America Forward who distributed Christmas cards that they had collected from across the country and wrote about their visit in a blog that can be found on www.moveamericaforward.com. Last week, we had Mr. Daniel Pepper, a reporter from TIME Magazine who has also posted two very good stories on the TIME website in the “World” section. The first article is titled, “Saving a Baghdad Neighborhood” and the second illustrates some of the day to day encounters we have called, “When War Stories Are Not About War”. Our most recent visitor was a French film maker who is filming a documentary that will include 1-4 CAV as a small part of a larger project and how we have worked to turn our piece of Baghdad around. Finally, I understand from Mr. Michael Yon that he will include some material about us in his upcoming book to be released in April. I do not know what is in it but it will include material not previously published on his website. If interested, it can be pre-ordered on his website as well.

Our area has become somewhat of a “must see” stop for officials in Baghdad. We have had no less than seven different General Officers visit us in the past six weeks and some multiple times. General Petraeus himself walked through C Troop’s area and was very impressed. General Petraeus brought along a member of the Iraqi Parliament and we then hosted a separate visit from Dr. Ahmed Chalabi who is responsible for repairing essential services in Baghdad. These two visit brought with them a significant amount of Iraqi press who help tell the story of the improved security which serves to encourage the Government of Iraq to apply some resources to Doura.

As more Iraqi Security Forces move into the city, some units are being required to provide a training team to assist them. We are one of those units and we have put together a Military Transition Team (MiTT) to train an Iraqi Army unit which is not exactly in our current area but close by. Major Tim Baer, our Squadron XO, is heading up the team and we have placed some of our best with him.

Finally, as we work though another month in our deployment, I want to stress how much we all appreciate your support. We are much closer to the end than the beginning but it is not over yet and this is a time that can be more stressful for families at home than for the deployed soldier. I am confident that we will return home during the month of April with a small number returning in March to help prepare the way. While exact dates have yet to be published by the Brigade, we expect to have block leave dates that encompass most of May. Please remember to thank an FRG volunteer!

From Haiti to New Jersey