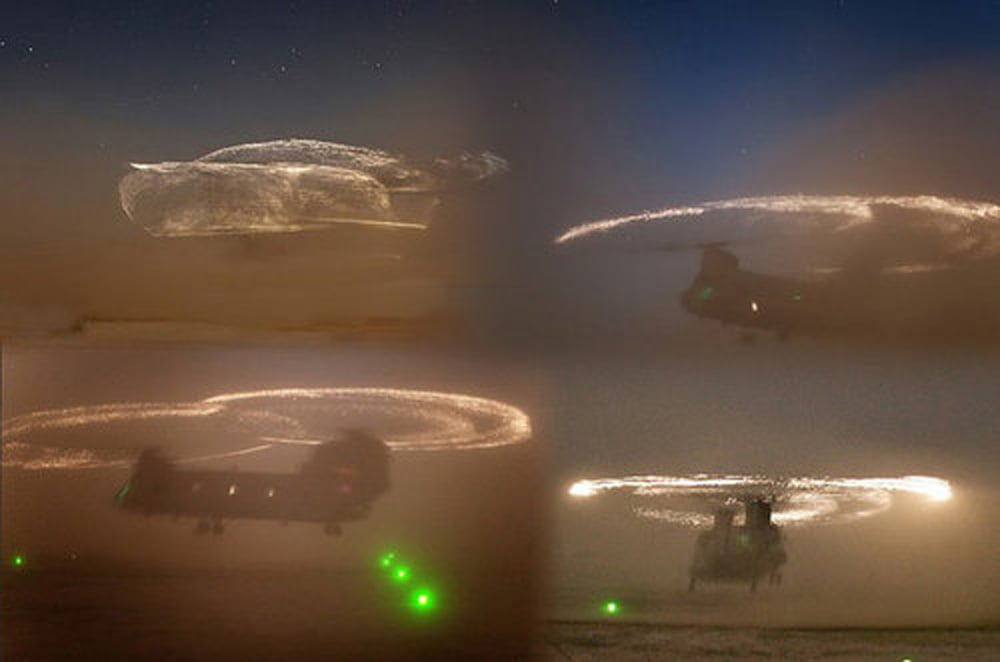 A few corrections to this interesting article: The article indicates that this occured during daylight.  All photos are night.  It indicates that Soldiers do not shield their eyes when the helicopters land.  Normally they either stay well back, or turn their backs.  They definitely shield eyes.  The article indicates that Kopp-Etchells is named after British Soldiers.  Kopp was a US Ranger.  Etchells was a British Soldier.  Both where killed in combat in this province of Afghanistan.  These images were made in Sangin, Helmand Province.  I cannot comment on the science described other than that researchers in the United Kingdom and United States have requested my photographs for study.  I have asked them many questions but it remains unclear to me what causes the Kopp-Etchells Effect.  I brought it up once to General Petraeus in Holland, and he thought it was caused by static.  I said researchers tell me that they remain unsure. But generally people will say it is static because it is a fact, for starters, that helicopters build up tremendous static while flying.  The static discharge can knock you flat if you touch a helicopter before it lands.  Another researcher recently contacted me from the United Kingdom asking for my photos.  I said they are free if you will just tell me what causes this! That research paper should be out soon, and I will publish it.

Descending into a drab, unnamed war zone, the helicopter is familiar sight. As it kicks up dust and sand, the onlooking soldiers barely shield their eyes; even their most sensitive organs are grizzled. The Sun is occluded by the grainy mist.

The casual cargo drop is then enchanted by a peculiar sight: a glowing halo adorning the helicopter’s blades. Cutting through the sand and dust, the blades smash into millions of tiny particles, each creating their own nano-crater, each contributing to the halo.

When a helicopter descends into a sandy environment, the enormous downward thrust from the rotors inevitably kicks up a cloud of sand. Once in the air, the helicopter’s blades cut through this cloud, generating the halo.

But how? To prevent early degradation, most helicopter blades are coated with an abrasion strip. This strip, typically crafted out of a metal like titanium or nickel, prevents the leading edge of the rotor blade from being worn down too quickly by the various particulate hazards of the atmosphere.

This abrasion strip can handle a lot of wear and tear, but the desert is a harsh environment. Sand is harder than the titanium and nickel that make up the abrasion strip, so when the blades begin cutting through a cloud of sand, the particles hit the blades and send bits of metal flying into the air.

“The Kopp-Etchells effect was first documented during combat operations in Afghanistan. The photographer Michael Yon named the effect after two U.K. soldiers who died there, Koop and Etchells.” 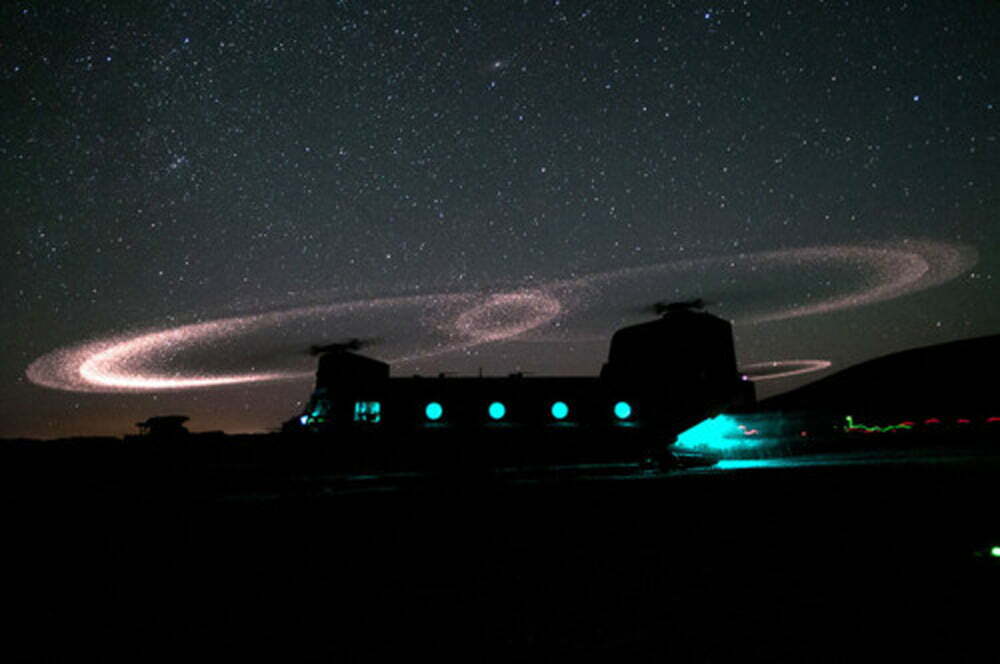 It turns out that the metals that make up the abrasion strips on helicopter blades, bracing themselves against the stinging force of the sand, can be pyrophoric. This means that the metals used are substances that can spontaneously ignite in air. But of course this doesn’t happen in normal circumstances; we don’t see bricks of titanium bursting into flames. Rather, the spinning blades of the helicopter generate a cloud of metal particles, just like the cloud of sand. Once in a powdered form, the metal particles can ignite and create the brilliant scenes above.

This may sound far-fetched, metals don’t just combust on their own? Right? Interestingly, we are all familiar with the pyrophoricity of metals, even if we don’t know it. Think of a flint, or some other metal that when struck creates a spark. The sparks that we see (maybe a dilapidated car is dragging a sparking muffler along the road) are in fact small metal particles being dispersed into the air by some impact and then igniting. If you have ever started a fire with a flint, it’s just a simple MythBusters-esq ramping-up to imagine how the rotors of a helicopter spawn a shower of sparks.

I’d like to think that, with a tired face partially illuminated by the unnatural yet natural light emanating from the rotors, a soldier can for a moment escape from a solemn world to one filled with wonder. The astounded children watching the lab demonstration and the soldier are fleetingly connected.

We Have No Southern Border — wide open