Some Thoughts About The Kingdom of Thailand

Years of work and combat are required to develop the necessary skills to become a serious war correspondent. (Afghanistan, 2011.)

Many people may not like you, but you will be free to criticize Thailand and its government until your visa expires.  Then they will renew your visa and you can continue.

If you go to the United States and are observed photographing government buildings or infrastructure, you might be arrested, even if the law permits such activity.

I was arrested in America for not telling immigration officials how much money I make.  I was handcuffed.  I never answered.  I was willing to go to jail.

They came to their senses and they released me, and I endured a painful vacation in the land of the free, and later returned to Afghanistan, where American Soldiers were trying to free the Afghan people whether they liked it or not.  Americans like to set people free so that we can ignore that we are shackled.

In Thailand, you can travel into every tiny village and photograph and video until your cameras fall apart. 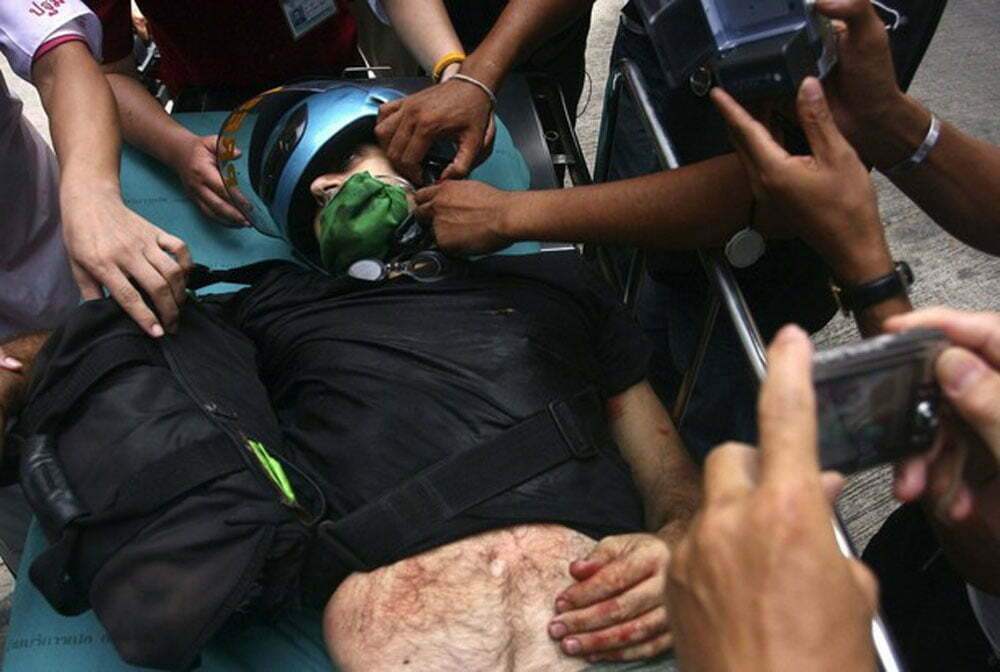 In the United States, when there is an incident, law enforcement cordons off a large area.  No press members are allowed to enter.

During the protests in Thailand, the press, and tourists, were free to roam the battlefields during the middle of the fighting.  Many did.

Hundreds of journalists were there, stacked up with the Royal Thai Army during the fighting.  Bullets were flying everywhere.

The RTA ignored journalists like they were gnats.  Soldiers often smiled and shared their water.

Before I got there, a courageous Japanese journalist was shot and killed.  Many blamed the government.  But again, how?  Who did it?  It could have been anyone.

Every time someone was shot . . . which happened many times . . . some blamed the government, though I saw nothing but discipline from the RTA.

There were zero restrictions on photography, on video, or access.  Any journalist who says otherwise was either not there, or is lying.

If you wanted to cross between the lines you were free.  I did so many times.  That is a freedom that many Americans say that they want, but we seem eager to surrender.

In India, if you want to swim with crocodiles, the Indian Police might say, “I wouldn’t do that if I were you,” but then they will watch you go.  Later that day, Indian police will dutifully alert the US Embassy that you were eaten.  Indians do not protect you from yourself.  Thailand is similar.  I love it.

Personal responsibility is real here.  You are free.  All consequences are on you.

You are free to wade into a firefight or to pet crocodiles.  Do not whine when you get bitten or shot.

We say that we want freedom, but Americans do not live in freedom.  We Americans seem to spend every waking hour plotting how to shackle ourselves.  Freedom is becoming an empty word in America.

America does not want fewer laws.  Many Americans want more laws.  You could never cover fighting so freely in America.

Minimal cover. Take it where you can get it.

Hundreds of journalists covered the months of fighting.  When it came to the showdown, all of the big players were here.  CNN, BBC, Al Jazeera, Reuters, AP, AFP, New York Times.

Reporters flew in from Korea to Japan, from South America to Canada.  I saw them every day.  Some were killed.

Their work was honorable, but some of us have no patience with those who blame others after getting shot in a firefight that they volunteered to attend.

The general theme of some reporting was that Mr. Abhisit and the Royal Thai Army were on a rampage.  This was false.

The allegation does not pass a sniff test.

The RTA earned its honor.

It must be embarrassing for the hundreds of journalists, with thousands of cameras in the hands of civilians, that not a single one captured a photograph of the RTA committing an atrocity.  Yes, tense videos depicting bullets flying have been published.  That is combat.

Sometimes the press seemed to outnumber the RTA.

Hundreds of second-rank journalists were there—great journalists but with no gold medal—and they had every interest in snapping that award-winning photograph.

Bangkok was hot and humid. Bad time to be in body armor. The RTA was honorable and polite.

Both sides were shooting.  Red Shirts and Men in Black among them were videotaped firing automatic weapons.

It is my suspicion that that the Men in Black were RTA veterans or veterans of other government agencies.  They were too good to be home-grown amateurs.  Some people claim that MiB they were former Border Patrol personnel who were personally loyal to their commander. I do not know.

One General switched sides and went to the Red Shirt camp.  I wanted to talk with him but before that chance came, he was shot in the head and killed by a sniper.  I asked Prime Minister Abhisit if he knew who did this.  He said no.

Belgium: Death in The Corn

Sacrificing Hearts: One Day the Vax-Kult will Die

LiveStream with Masako Ganaha in Netherlands

Klaus Schwab Bragging about Burning Down the World